The return of live poker has been slowly progressing with a few series of events popping up here and there in recent weeks. One of Asia’s leading operators, the Asia Poker League (APL) initially had an exciting year planned ahead but was left with no choice to adjust their schedule based on unexpected circumstances. The current global health crisis has affected the live poker scene tremendously with travel restrictions still being in effect at present, allowing tournaments to cater only to the local population.

The APL Tip-Off series was held from July 19th – August 16th, 2020 in Seoul, Korea and was set to run a total of five events. The awaited festival was inevitably cut short due to a rise in confirmed cases with the Korean government issuing a level 2 nationwide status. This led the last two events on schedule to be postponed at a later date. Regardless of the interruption, three events successfully ran its course with the Main Event surpassing its expected number of players. The Homecoming series was supposedly planned to cover a total of KRW 400,000,000 (~USD 337,654) in combined guarantees with the Main Eventbeing the bulk of the said prize pool. However, with the last two events failing to take place, KRW 360,000,000 (~USD 303,888) in guarantees were awarded to the winners with the Main Event posting the KRW 300,000,000 (~USD 253,240) prize pool. 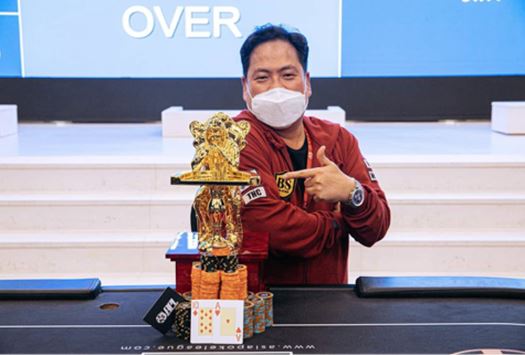 The highlight of the series came out with a huge success having attracted a whopping 1,000 entries for the Main Event to generate a prize pool of KRW 380,000,000 (~USD 320,771). Eight day 1 flights ran across different locations and were spread out over the course of two weekends with day 2 and the final day held in Hotel Eliena, Seoul. Battling through a large field, players who qualified into day 2 still had to carry on until only 80 players were left for a minimum payout of KRW 760,000 (~USD ).

Beginner’s luck as you may call it, Kim Byoung Soo won the Main Event title starting off as a recreational player who just began learning Hold’em seven months back.

The APL Tip-Off series was his first big to attend and surprisingly tops the 1000-entry field. Soo ran extremely well in the late stage of the tournament, joining the final table as only the second smallest stack. With the probability of getting Aces being statistically 1 in 221, Soopicks up Aces on the first hand of the final table play and quickly manages to double up his short stack. Soo’s luck however does not end there as he manages to pick up the rockets a couple more times and receives a double up every single occasion. It might have been fate for the lucky amateur as he believes his best friend who passed away not so long ago may have helped him from up above. Dedicating his win to his friend, Soo cashed in on a KRW 100,000,000 (~USD 84,468) payout for his amazing victory.

BE THE CHANGE YOU WANT TO SEE IN THE WORLD 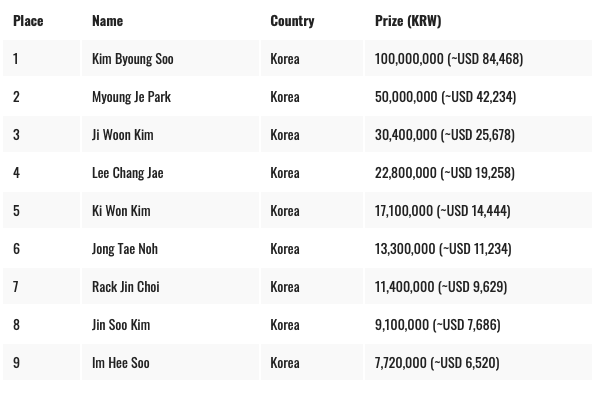 The last event to occur in the supposedly five-event series, the High Roller event drew in a total of 99 entries to compete for the KRW 50,000,000 (~USD 42,234) guaranteed prize pool. The single day tournament ran alongside the Main Event’s final day with online player Jun Beum Chun claiming the High Roller event title. With only the final table players getting a payout, Chun cruised through the entire event from start to finish. Entering the final table with a massive chip lead, Chun continued to dominate the final table and scoop up the top prize of KRW 15,000,000 (~USD 12,670). Chun, who is relatively an online player, shared that he likewise got his biggest score in PokerStars’ Sunday Million just a week before the event. Running good in both live and the online poker scene, the month of August has definitely landed the fortunate player a notable profit.

The No Limit Hold’em Turbo event with a KRW 10,000,000 (~USD 8,446) guaranteed prize pool awarded recreational player Jeong Yeol Yu the APL trophy for topping the small pool of players. Similar to Main Event winner Kim Byoung Soo, Yu also ran extremely well during the series of events. The sweet victory is reportedly Yu’s first ever win for a Hold’em tournament but was apparently not enough for the beginner, as he placed second in the High Roller event the following day. Unsuccessful in clipping a second trophy, Yu will have to settle for only one feat this festival.