It was another fast elimination day at the inaugural Asia Poker League Da Nang Main Event with 33 players returning to action for Day 3 at host venue Risemount Premier Resort. In just under five hours, the final 9 was formed. We’ve got a short recap below and a brief look at the finalists. 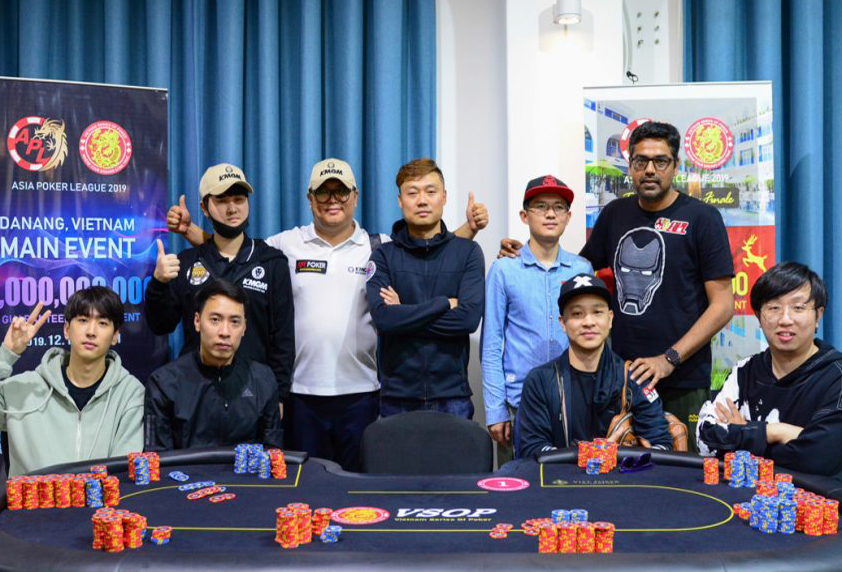 The lone Indonesian player in the lineup – Anton Widjaya – leads the final 9 with his towering 3,545,000 stack. Widjaya has cashed in numerous events in Asia however he is still on the hunt for his first major victory. His largest score was at the PokerStars Super Deep event in Manila, Philippines back in 2017 finishing in 3rd place for US$ 9,301. With Widjaya’s commanding stack, he is well on his way to a new personal record. Widjaya denied Dang Duy Thanh in 10th place to drive his stack to where he ended the day.

Out of all the Vietnamese players that found their way to Day 3, only Nguyen Minh Tuan will raise the flag coming final day. Nguyen has been consistent throughout, closing each elimination round within the top five. This is a strong showing for someone who only has two prior live tournament cashes. Wherever Nguyen places, he will have earned his largest live tournament cash.

Four Korean players representing KMGM made the cut to the final day. The largest stack of the bunch is Tiger Lee Seok Young with 2,180,000. Lee is a young live tournament player with just seven cashes under his belt. While he is already guaranteed to earn his largest live payday, he is looking to ship his first major title. One of Tiger’s biggest pots of Day 3 was the elimination of Quang Nguyen in 13th place.

China’s Liu Jian continued to make his presence felt. He entered Day 2 as the overall chip leader from the starting heats, closed Day 2 in second rank, then ensured his spot to the final table running fourth with a solid 2,145,000. Among the players he eliminated was Tae Joon Cho in 10th place to form the final 9. This is Jian‘s first-ever live Main Event final table appearance. His largest cash was at APPT Manila 2018 finishing 3rd at the Saturday Superstack for US$ 21,835.

In August 2015, Zhang Chi finished 10th out of 1075 entries at the CPG Main Event in Sanya, China to claim his largest live score to date of U$$ 18,745.Since then, not much action was seen from Zhang until this year with four ITMs which included another cash at the CPG Main Event. Zhang enters the final 9 with a healthy 1,465,000.

Song Daewoong is another new player in the Asian live circuit with only 5 cashes all earned this year. Wherever he finishes  it will be his deepest Main Event finish. Song will also pocket his largest live score. At Day 3, Song spiked up, u-turned downward, then back up again. His two double ups took him out of the danger zone to bag up a decent 1,160,000.

Sumit Sapra is  the lone player from India in the list and is a newly signed APL Ambassador. He is the most decorated and experienced live tournament player of the final 9 with achievements dating back to 2011. His stats include cashes all over Asia and Europe, and at the WSOP. The largest payday of his career was at the APL Vietnam in HCMC on November 2018 where he pocketed US$ 36,511 at the High Roller event for 3rd at the High Roller. Alike all the players in this list, Sapra is hunting down his first major win.

Not much is known of Lee Jong Wook other than he is a new player in the Asian live circuit. Lee entered Day 2 low in the pecking order but managed to grind upwards and eliminate Yong Deok Kim with kings set over top two pair. Wherever Lee places, it will be his largest score and deepest finish at a major Main Event.

The fourth Korean to earn his seat was Young Hwan Sun with 685,000 in chips. Sun has several small cashes earned the past two years and once this year. No matter where he places here, it will be his largest live tournament cash and first ITM at an APL event.

Day 3 kicked off with a crazy one-outer sending Nguyen Quang Minh first to the rail. It was all in on the turn with Nguyen holding the higher full house but got rivered by quads. From there, players tumbled fast until the final two tables where it began to ease up.

The day’s entering massive chip leader Dao Minh Phu suffered three hits to bring him to half his starting stack then built it up again to become one of the chip leaders of the final two tables. He eventually fell in 16th place, paying a couple of costly double ups before doing so. The unofficial final table of 10 was formed at the fall of Dang Duy Thanh in 11th place. To close out the day, Tae Joon Cho met the rail at the hands of Liu Jian with pocket jacks staying ahead of pocket fives.

You can read up on the action via our live posts.