2 DAYS AGO by SOMUCHPOKER NEWSROOM 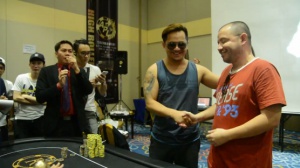 Lester Edoc is the APL Road Series Main Event champion! He knocked out the last player in his way, Harold McDonald, to capture the Php1,478,800 first place cash and the bragging rights championship title!

The final hand of the Main Event saw McDonald raise to 250k and Edoc call from the big blind. At the flop

, Edoc led for 300k, McDonald tanked then moved all in. Edoc snap-called and turned over his

McDonald earned Php1,037,400 for his 2nd place finish. We will have a recap for you so stay tuned for that write up.

Lester Edoc may have a massive stack but he is having difficulty putting away Harold McDonald. After grinding him down McDonald returned with a double up. The hand kicked off with Edoc limping in and McDonald checking on the big blind. The flop came

. McDonald checked then called Edoc’s 125k bet. On the

two pair ahead of Edoc’s

improved McDonaldfurther to a full house.

McDonald proceeded to win another pot to and climbed over 2M.

Despite the extra chips Harold McDonald has gained, he is still falling fast with Lester Edoc grinding him down with numerous raises and bets. Here were a few of those winning hands..

Edoc raised to 165k and McDonald called. On the flop

, Edoc bet 125k and won the pot. Another pot saw McDonald raise to 165k, Edoc three-bet an additional 975k and won it. Shortly after, McDonaldraised to 180k, Edoc called, and the flop landed

, Edoc checked, McDonald bet 160k, and was called. On the

turn it was checked by both but on the

river, Edocfired out 200k and won it.

Harold McDonald has chipped up and we’ve got a game! Prior to his double up, he won the first pot of the heads up round. It started with Edoc limping in on the button and McDonald checking on the big blind. The flop

McDonald check-called a 100k bet. The

turn had both players checking; then on the

river, McDonald bet 115k and won it with no challenge from Edoc.

A few hands after came the big double up. Edoc raised to 175k, McDonald jammed, and Edoc called. McDonald had

5pm: Heads up between Lester Edoc and Harold McDonald

We are now heads up between Lester Edoc and Harold McDonald! Edoc leads with a massive stack of 6M while McDonald has 900k.

Guak Do Gyeong moved all with

and Lester Edoc called him with

. Guak had an impressive run at the Main Event topping the starting days chip count, finishing within the top five entering Day 3, and running third in chips earlier today. He earned Php667,300 for his impressive run.

4:55pm: Lester Edoc dominating; McDonald and Guak below a million

Lester Edoc has over 70 percent of the chips in play with over 5M while both of his opponents have dropped below a million each. While most of the pots didn’t see a board, one of them did and it paid him well. From the sb seat Guak Do Gyeong limped in and Edoc checked from the big blind. At the flop

turn, Guak bet 160k, and Edoc called. On the river

for a full house. Guak mucked and paid up.

With blinds quite high, pots are heftier and bets are costlier. For the last Korean at the table, Guak Do Gyeong, he’s been quite active, raising numerous times preflop. At one of those moments, we got to see a flop

BJ Perez has just exited the Main Event. He was all in with

which ran smack into Lester Edoc’s

. The board ran out

. Perez earned Php493,900 for his deep finish at the Main Event. This is his highest live tournament earning and deepest finish in a major international event.

4:20pm: Guak Do Gyeong doubles up through BJ Perez

A big pot finally went down with Guak Do Gyeong shipping in a double up. The hand kicked off with a 175k by Guak and called by BJ Perez. At the flop

, Guak bet but before a count was done, Perez shoved and Guak snap-called. Perez was ahead

was safe for Perez but with the

river, Guak overtook and doubled up to 1.5M. Perez dropped to 870K.

Lester Edoc has just won three pots at the start of the new round to bring him up to 2.8M. On one hand he raised to 155k and found two players to join to the flop

. Everyone checked and the turn camed

Edoc took down the next one, first limping in on the small blind. The flop

saw him lead out for 65k and big blind Harold McDonald folded. Two hands after, he raised on the utg and won the blinds and antes.

Players are on a quick break. 4 remaining.

Harold McDonald has just been dethroned by Lester Edoc. The former raised to 125k and got action from sb BJ Perez and bb Lester Edoc. At the flop

, they all checked it and the turn landed

. Perezchecked again, Edoc bet 135k, and only McDonald matched it up. On the

river, Edoc bet 225k, and as we’ve seen before, McDonald tanked. He eventually called showing his 4-5 two pair that was behind Edoc’s

3:30pm: No challengers for Lester Edoc

Lots of pots being won preflop with uncalled raises doing the job. One of those pots was a bit meatier. Harold McDonald raised to 125k, Guak Do Gyeong called, Lester Edoc three-bet to 350k, and won it with no callers.

Since the fall of Cho Hyung Woon action has slowed down with players raising but finding no callers. Harold McDonald leads with nearly 3M in chips. The total chips in play is 6.9M.

improving to a set on the board against

. Two hands later though, McDonald took it all back. Woonwas all in with

We are down to 4 players.

With 5 players remaining, most of the action seems to be between BJ Perez and Harold McDonald. On one hand, Perez limped in from cutoff and McDonald checked. At the flop

, both checked and the turn came

, McDonaldchecked again, Perez bet 250k, and won it with McDonald folding while showing his 9-5.

One orbit later, the next war between them saw Perez raise to 90k and McDonald call on the big blind. No bets came until the river board

with Perez laying out 150k. McDonald tanked for a bit then finally slid out the call. It was a good one. McDonald won with

On a raised pot preflop, sb Guak Do Gyeong led for 130k and bb BJ Perez called. On the

turn, Guakmoved all in for 515k and won it Perez surrendering his hand.

Big stacks Bell John “BJ” Perez and Harold McDonald went head-to-head with the pot ballooning to over 300k. Action kicked off with utg Perez raising to 85k called by button McDonald. At the flop

, no bets arrived however on the

river, Perez fired a 200k bet sending McDonald to the tank. It took a minute or so for McDonald to decide, even asking Perez if he would show, the answer was no. McDonald called with his

but had to pay the bet with Perez turning over

Mike Takayama has been sitting on a short stack well below average since the start of the day and found several opportunities to bring it up to however it all came crashing down against the chip leader Harold McDonald.

The hand began with a limp by BJ Perez followed by McDonald on the sb seat, and Takayama checking on the big blind. At the flop

, no bets landed. On the

turn, McDonald slid out at 75k bet and only Takayama called. The river

had McDonald bet again, this time laying out 110k. Takayama shoved and it was snap-called by the leader. Takayama turned over

nut flush but it was no good against McDonald’s

full house. Takayama earned Php296,500 for his deep run at the Main Event.

One of the Philippines leading pros has just fallen out of the running with John Tech eliminated by Bell John “BJ” Perez. Tech moved all in with

and was called by Perez with

The chip leader Harold McDonald claimed the first sizable pot of the new level. He raised from the utg seat to 60k and got called by Cho Hyung Woon on the big blind. At the flop

, Woon checked,McDonald bet 85k, Woon raised to 200k, and was answered by a shove from the leader. Woon folded. McDonald now over 2.3M.

We are down to 7 players at the Main Event. Here are the chip counts:

After losing chips to the leader, Lester Edoc quickly made it back by railing Choi Jae Young in 8th place.Choi moved all in for 241k from the utg seat and Edoc looked him up down the orbit. Choi had

and needed to hit against Edoc’s

. The board however threw blanks running

Lester Edoc got involved in two pots that cost him a bit more on the loss to Harold McDonald. The first one was against John Tech who raised to 51k. Edoc defended on his big blind. At the flop

, both checked and the turn felted

river both checked and Edoc won with

Two hands after, Edoc raised to 60k from the button and McDonald defended on the big blind. At the flop

, no bets were fired. On the

river, no bets again and McDonald won with

The second hand of the final table saw the immediate fall of Joseph Sia. With action folding all the way to the blinds, he shoved and BJ Perez on the big blind called. Sia had

, and the board ran

The first pot of the final table went to Bell John Perez, the day’s entering second in command. He raised 55k from the utg seat and was called by big blind Guak Do Gyeong. At the flop

, Perez continued with a 50k bet and Guak check-called. On the

turn, Perez bet 110k and won it with Guak folding up.

1pm: Race to the title begins!

Cards are now flying at the APL Road Series Vol.1 Philippines in Clark Freeport, Pampanga with the Final 9 players back at the Main Event felt. This inaugural festival has been ongoing since February 24th and will wrap up later today with the crowning of the first APL champion in the country along with the awarding of the last remaining side events. While we eagerly await the emergence of the champion, here’s the lowdown on the tournament.

Here are the Final 9 contenders…

To know more about the Final 9, just click on the link below. You can also read up on the previous day’s action that earned them a spot at the final table via the link provided.

The NLH Freezeout side event concluded last night with Korea’s Yoon Kyosung outlasting the 60 player field. Yoon defeated Canada’s Eric Wasylenko at the heads up round to lift another trophy for the country. We will have a recap for you on that event later today.

The two-day Deep Stack event will see the final 8 players back at the felt at 2pm. An hour later, at 3pm, the last side event will be underway, the 6 Max tournament. Buyin is Php8,800. Players begin with a 10,000 starting stack, blinds at 25-50 with increases every 30 minutes. Registration stays open until the start of round 7.